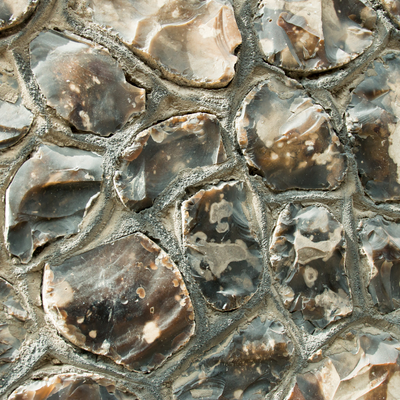 Monolith Masterclass: Uncover the mysteries of the Mineral Kingdom one stone at a time. November’s class reveals the ancient power & wisdom.

Join author and crystal healing expert Nicholas Pearson for online masterclasses delving deep into the qualities, meanings, and mysteries of a single stone. This month we explore the ancient wisdom and power of humble flint.

For more than two million years, our ancestors have gathered flint to use in everyday life, both secular and sacred. Flint’s properties lend themselves to practical uses while also conveying deep, spiritual meaning: starting fires, forming blades, and in architecture, too. Egyptians once crafted bracelets from this stone, while blades and other shaped flints were buried with the dead across the world. Special flints with fossils or naturally pierced with holes were once regarded as the holiest of holies in the Stone Age.

In this class we will reach farther back in time than any of our classes yet to discover the meaning and magic of this ancient stone. Together we will learn how flint ignited technological advance in several ways while seeking its deeper symbolism and healing powers. At the intersection of the archaeological and mystical, this class will include:

As a special bonus, Nicholas is giving away a special collection of flint from around the world to one lucky participant. Registering for the flint masterclass automatically enters you in a giveaway for an assortment of flints, including specimens from England, France, Poland, Arkansas, Ohio, Florida, and more!

Register below to reserve your place in this one-of-a-kind workshop. Recordings are offered within 48 hours of the class and remain available for 30 days, so please feel welcome to register even if you cannot attend live. After 30 days, recordings are available on Patreon.

Nicholas Pearson has been involved in all aspects of the mineral kingdom for nearly three decades. He is the award-winning author of seven books, including The Seven Archetypal Stones, Crystals for Karmic Healing, and Crystal Basics. His writing has appeared in magazines, blogs, and other media around the world, and he is a popular guest on radio, television, and podcasts worldwide. Nicholas is among the foremost experts on crystals, combining his background in mineral science with his love of healing, spirituality, and folklore to illustrate how and why crystals can change our lives. Nicholas is also a flower essence therapist and Reiki practitioner and teacher. He has travelled around the world offering classes on a variety of topics, and he looks forward to offering in-person classes again in the future. Nicholas lives in Orlando, Florida with his partner and photographer extraordinaire. 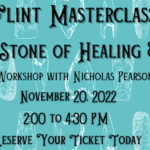 Manage Cookie Consent
We do not sell your information. To provide the best experiences, we use technologies like cookies to store and/or access device information. Consenting to these technologies will allow us to process data such as browsing behavior or unique IDs on this site. Not consenting or withdrawing consent, may adversely affect certain features and functions.
Manage options Manage services Manage vendors Read more about these purposes
View preferences
{title} {title} {title}